Hopeful in the San Juan Mountains 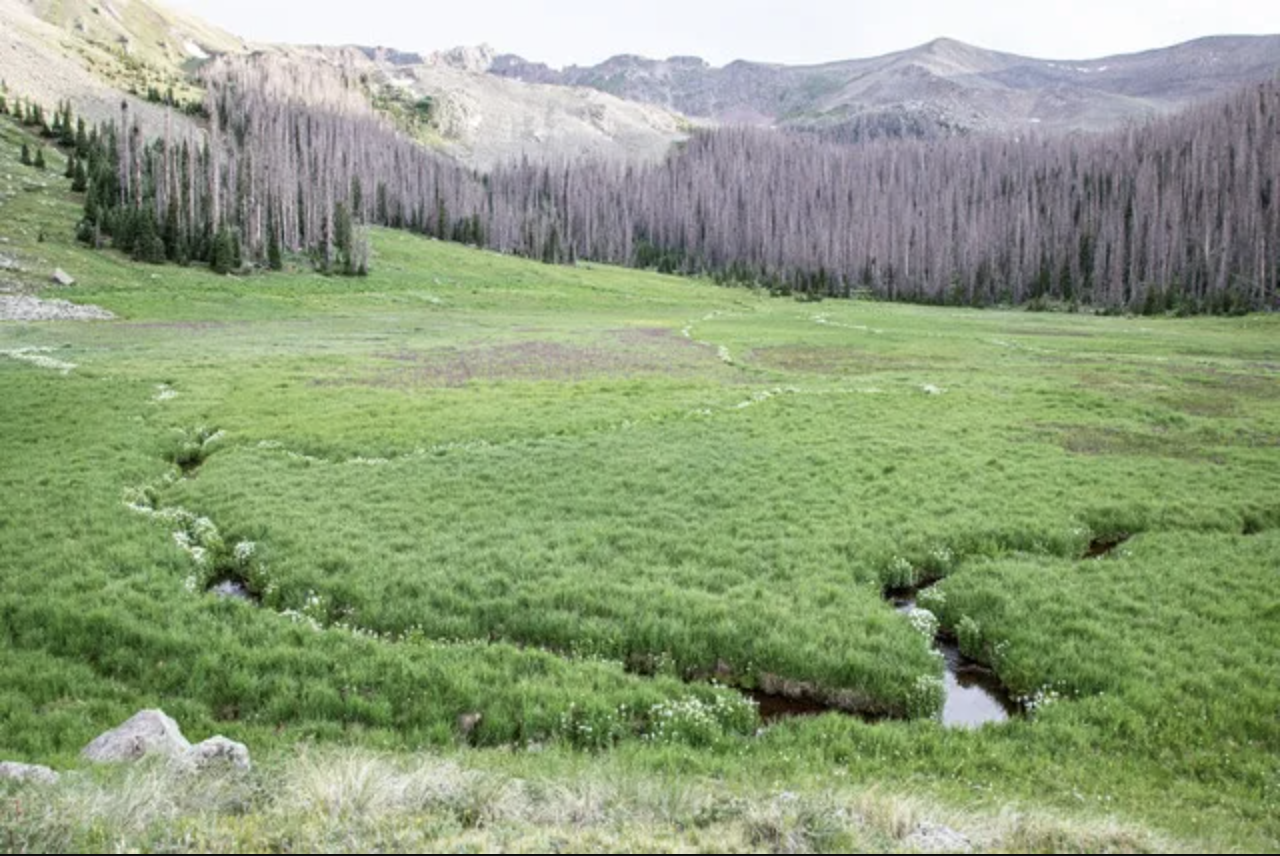 Mosquitos swarmed around my head as I ate a hot, rehydrated chicken and rice freeze-dried dinner. A dozen elk grazed peacefully a few hundred yards away in the waning light on the other side of a large wetland. White snowball inflorescences of heartleaf bittercress lined the creek winding through the green sedges of the fen. Twelve to thirteen thousand foot ridges and peaks surrounded me on three sides.

It was the first night of a three-day solo backpack trip up to the headwaters of one of my favorite drainages in the San Juan Mountains. The first four miles of the hike were on a developed trail and my mind spent more time thinking about what I had left rather than where I was. That all changed once I started bushwhacking towards the headwaters, scrambling over downed trees along uneven ground where attention was required or I would twist an ankle.

The next morning, I walked out into the wetland to photograph the bittercress and pink elephant head flowers in the early light. The ground was moist and spongy from the early summer runoff. Fens and bogs like this one are found throughout the San Juan Mountains, their deep organic soils absorb and then slowly release water throughout the year, ensuring the Rio Grande will flow even during the driest months.

After a breakfast of hot oatmeal with cinnamon, I squirted around the the wetland and started up through a skeleton forest towards the ridge that would lead me to the mountain I hoped to summit. The overstory of spruce trees have been dead for more than a decade now as result of the spruce bark beetle epidemic that swept through the Rio Grande National Forest.

The spruce beetle is a native insect that usually survives on the inner bark of freshly fallen and large, old Engelmann spruce trees. The population of beetles are usually fairly low, but it exploded as a result of the severe drought of 2000 to 2002. The trees became so stressed they could not produce enough sap to protect themselves. The beetles took advantage of the weakened trees and their population grew to a level that allowed them to overwhelm the uninfested trees even after they had recovered from the drought. Although scientists can’t say definitively that 2002, the driest year on record, was a result of human-influenced climate change, the gun was smoking.

The ground below the dead trees was carpeted with knee-high wildflowers so thick I couldn’t see my feet. Bluebells, ragworts, bittercress, geraniums and taller monkshoods thrived on the shallow moist soils. Small creeks gurgled down the steep glacial till and young spruce trees flourished with the increased light reaching them since their parents lost their needles.

It would be easy to feel good about the water supply while hiking up this north slope, but it was just the second week of July and normally the creeks would be flowing even higher. The Rio Grande was running about fifty percent of average for this time of year and it was worse on the other side of the Divide where the San Juan and Colorado Rivers were running about 30 percent of average.

The northwestern United States was breaking all-time heat records before I left on the hike and Death Valley broke the world record for highest average temperature in a twenty-four hour period shortly after I got back. There has also been increasing coverage of the megadrought being experienced in the Southwest. A megadrought is defined as a drought lasting twenty years or more. The Southwest has experienced megadroughts before, but droughts are temporary and some scientists argue that the Southwest is actually experiencing expanding aridification, a more permanent drying of the area due to climate change.

Some of the consequences of climate change have been widely discussed, such as an increase in severe weather events and wildfires, dropping water tables and rising sea level. Not as widely discussed are the impacts on trees. In some parts of North America, trees are not coming back in burned areas due to the heat and drying soils. Seedlings are much more susceptible to increases in temperature than mature trees and some burned forest areas are converting to permanent shrublands and meadows.

Climate change is upon us and is exerting a toll on humans, plants and animals. But there is hope that humans can head off the absolute worst impacts. The European Union just announced an ambitious plan to become carbon neutral by 2050 or sooner. The Biden Administration continues to ramp up ideas and policies to drastically cut U.S. emissions, and other countries are taking notice. And we can all do our part by reducing our personal carbon footprints and by voting for politicians at local, state and national levels who take climate change seriously.

Fifty-three years ago Paul Ehrlich wrote The Population Bomb predicting catastrophe for the world due to unchecked human population growth. Since then, the world population growth rate has been reduced by more than half while world agricultural yields have doubled. We need to do even better than that in reducing our carbon output, but I believe it provides a glimmer of hope that humans can rein in carbon output while also mitigating impacts on all the other species we share this earth with. There are and will be extinctions and human suffering, but we may be able to avoid the worst effects with aggressive action now.

The kaleidoscope of color shifted as I hiked through the spruce krummholz and into the alpine zone. Columbines, cinquefoils, buttercups, marsh marigolds, paintbrush and forget-me-nots showed off among the sedges, grass and boulders. I worked my way up a grassy bowl next to a snowfield and finally topped out on the long talus ridge that would take me to my destination. Nine bighorn ewes grazed on the tundra a quarter mile away right in the path I was to walk. Thunder suddenly rumbled in the clouds building above. I looked at the sheep, at the clouds, and turned back down the slope to seek refuge in the trees. Rather than being disappointed by not reaching the top of the peak, I was happy for the impending rain.

Mike Blakeman retired from the U.S. Forest Service in 2019 after a 41-year career working in recreation, forestry, environmental education and public affairs. During that time, he has also worked on wildfires as both a firefighter and fire information specialist. Mike lives at 9,000 feet above sea level west of Creede and enjoys photography, hiking, cross country skiing and snowshoeing.