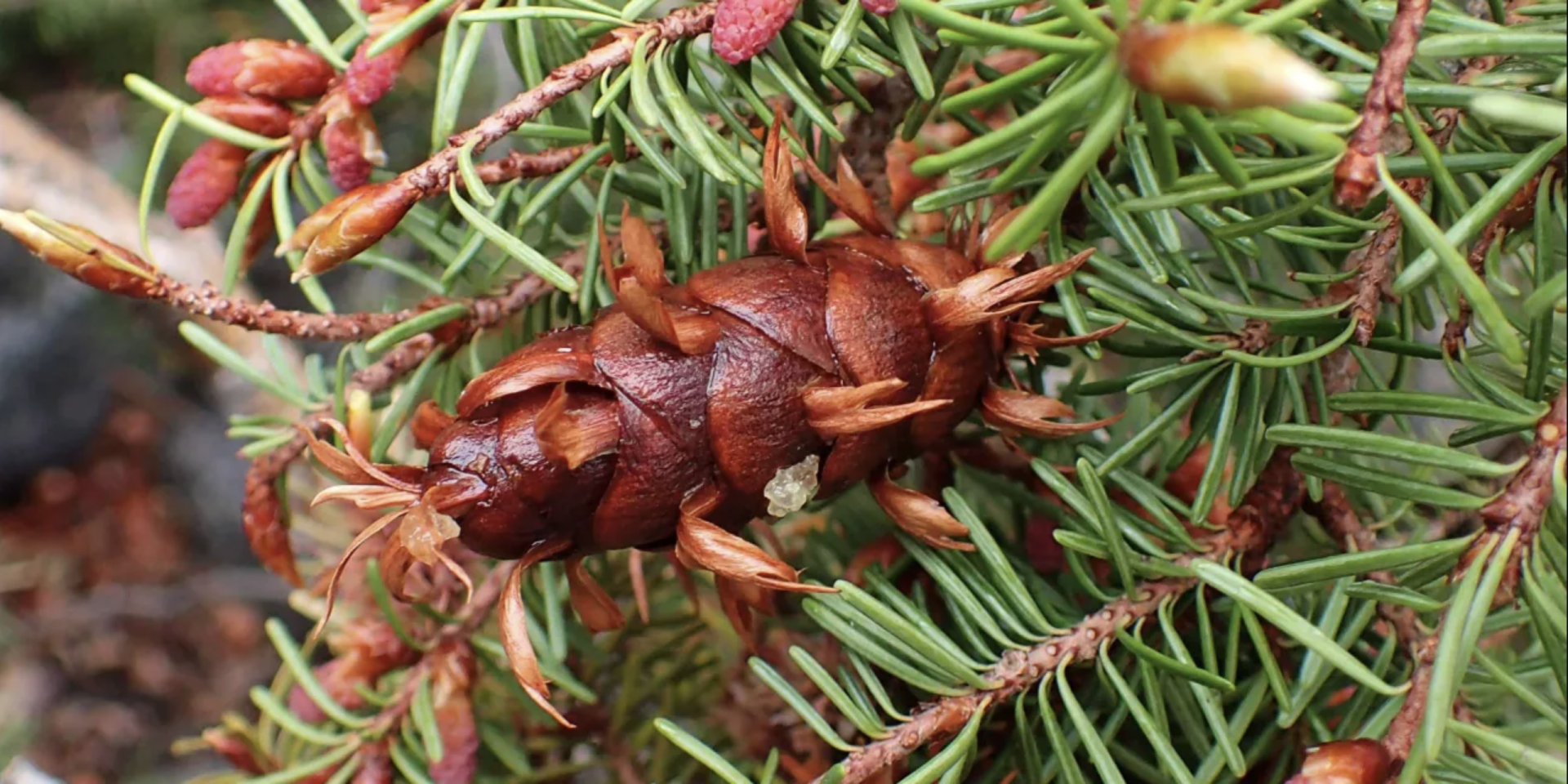 The woodlands and forests of Crestone and the Baca are mainly comprised of evergreen trees. At this time of the year, if not covered with snow, they paint our landscape green, while the leafless cottonwoods and aspens produce grey swaths along streams. In the Baca and up a bit from the valley floor, two evergreen trees form woodlands, pinyon pine (Pinus edulis) and one-seeded juniper (Juniperus monosperma). Along the streams and adjacent slopes down the Sangres there are four other evergreens: Colorado blue spruce (Picea pungens), Douglas fir (Pseudotsuga menziesii), ponderosa pine (Pinus ponderosa) and white fir (Abies concolor).

These are all cone-bearing trees (or conifers). They are descendants of ancient plants, evolved over 300 million years ago, much older than their nephews, the flowering plants that arrived 140 million years later. Conifers produce male and female cones, and the latter release naked seeds. Flowering trees don’t produce cones, and seeds are protected by the surrounding fruit. Hence evergreens are gymnosperms (naked seeds) and flowers are angiosperms (covered seeds). You can generally see both cones on the same evergreen; the small male cones don’t last very long but produce enormous amounts of dusty pollen in the spring. Many residents suffer from pollen allergies from these trees, especially the pinyon. Pollen grains land on the young female cones, produce a tube that moves inside, and individual cells fertilize the eggs. The eggs become seeds, the female cones slowly expand and mature, and the seeds are eventually blown away or spread by squirrels.

In our neighborhood, conifers survive in different habitats. The pinyon and juniper are the most drought-tolerant, although the juniper a bit less so. They both have deep roots and can obtain water from 30’ or more below the ground. The juniper may suffer from water stress during the winter, and many develop a brown-bronze appearance. We planted a couple of junipers and dump a bucket of water under them a couple of times in the winter to help ensure their survival. Most of these trees are young, around century old and replacing those cut for timber. The oldest trees are the junipers; a stand down in the Grants (“the grove of the ancients”) was aged by a former resident, Jim Erdman, using an increment borer, and he found some over 700 years old. The magnificent stand of ponderosas along the lower Willow Creek Trail certainly predate logging.

Conifers produce tough and durable leaves, usually needles but sometimes scales. Examining them makes identification easy. The juniper produces flat scales packed together along the stem. The two pines produce needles in bunches, the pinyons with two short stout (1.5”) needles and the ponderosa with three long and slender needles (4” long). Although not as drought tolerant as the pinyon, ponderosas can grow amidst the woodlands lower down (especially near the streams) as well as in the canyon forests above. They are often distinctive for the orangish plates of bark on large trunks. The three remaining conifers grow near streams in the canyons and out a bit into the Baca; they all produce single needles on the stem.

The least drought-tolerant is the white fir, with long (1.5”) and rather flat needles, whitish from wax particles, forming a flat surface along its branches. This is perhaps the most attractive foliage of our evergreens. The Douglas fir and blue spruce are similar at first glance with short 1” needles, but the former produces flat needles soft to the touch and the latter round angled needles prickly to the touch. These are about equally drought-tolerant and not found in the woodlands. During a walk up any of our creeks, you encounter all of these trees. I am particularly partial to the ponderosas and Douglas firs, trees of from my childhood in eastern Washington and ranging from British Columbia to the Mexican border.

Above 10,000’ elevation, these evergreens are replaced by several others forming the subalpine forests (Crestone Eagle, November 2021), especially the Engelmann spruce and subalpine fir, and even the bristlecone pine.

The lower elevation evergreens still grow around and in Crestone. Early in Crestone’s history, both ponderosa and Douglas fir were much more common lower down. During the mining period, 1880-1906, lumber mills were established up South Crestone and Willow Creeks, and a bit later in town. The taller spruce, ponderosa, and especially Douglas fir, were harvested and milled into stout timber for shoring up the mining tunnels, especially in the looser rock at the tunnel entrances. There was much deforestation during those times. Even ranchers took out the junipers for durable fence posts. With a hotter and drier climate these trees won’t return to those lower elevations, likely to retreat more upslope and up the canyons.

We are fortunate in Crestone to have a forested town landscape that is almost entirely of native flowering and conifer trees. The conifers make excellent landscape plants around homes, keeping them a bit away for fire protection. With occasional watering, especially before the roots grow deep, they will thrive.

Winter is a challenging time for evergreens. Their green foliage absorbs light, but there is little or no photosynthesis. Thus, the needles have evolved mechanisms to divert the excess light energy. Shorter-lived and faster growing flowering trees have no such problems; they just drop their leaves.

(Thanks to Jim McAlpin for information on mining and timber).