San Luis Valley Wetlands: Critical stopover habitat for bird migration and the ‘kidneys’ of the Earth 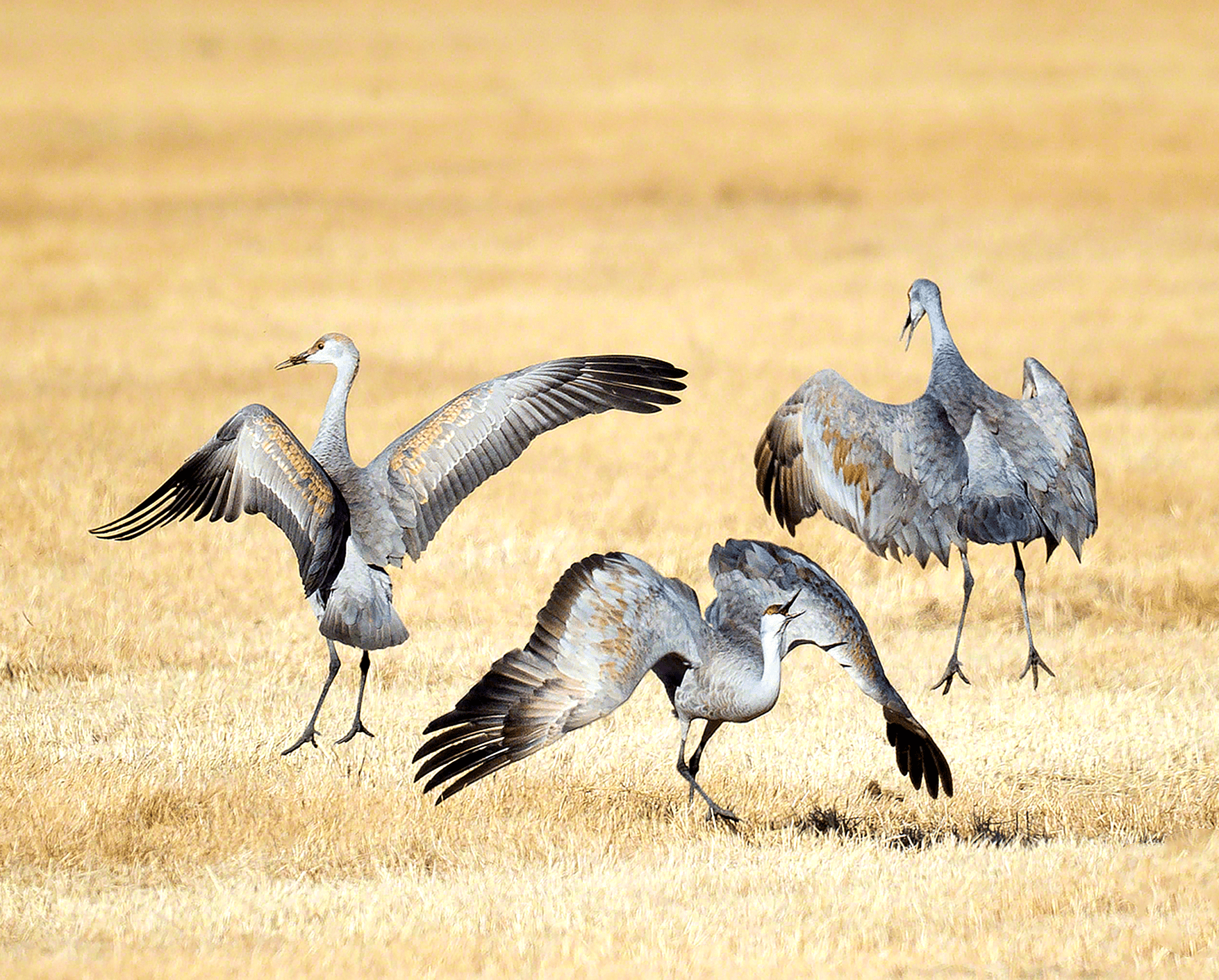 Each spring and fall, thousands of feathers slice through the brisk San Luis Valley (SLV) sky, alerting resident wildlife, local farmers, and eager bird-watchers to the change of season. Ranging from shorebirds to songbirds, a myriad of avian species visit this high-elevation desert as they migrate along the Central Flyway. Spanning hundreds to thousands of miles, these migrations speak to the beauty, intelligence, endurance, and collective determination of avian species worldwide.

Migrations also highlight the importance of maintaining healthy habitat along migratory corridors. The San Luis Valley’s mosaic of wetlands, riparian corridors, and agricultural fields is a critical rest stop for determined travelers. Without areas like the SLV to take rest and refuel, birds would arrive to their destinations underweight and undernourished. Protecting ground and surface water honors the miraculous winged creatures that bring energy, life, and color to this Valley.

With water demands exceeding supply and a water-export proposal afoot, the future of the SLV as a migratory stopover is unknown.

Jenny Nehring and Cary Aloia, SLV biologists and partners who run Wetland Dynamics, a small business committed to the conservation of critical SLV ecosystems, explain that many people “overemphasize the importance of wintering and breeding grounds,” when, in fact, a successful migration requires the presence of intact, resource-rich habitats along the way. High-quality habitat in the SLV provides optimal conditions for many of the 400 bird species that travel the Central Flyway. This is especially true for Central Flyway ducks, waterbirds, shorebirds, and the iconic Sandhill Crane.

For birds that winter in Mexico and South America, the SLV is ideal for breeding. The region is one of North America’s most critical breeding grounds for various species of duck and colonial wading birds, specifically the Cinnamon Teal. Similarly, priority duck species such as Mallard and Northern Pintail depend on the Valley’s flooded wetlands and densely vegetated habitats.

For bigger migratory bird species and waterfowl, the Valley functions as a vital rest stop. Amazingly, nearly the entire Rocky Mountain Population (RMP) of Greater Sandhill Cranes stop in the SLV as they fly along the Central Flyway. Their numbers can reach upward of 20,000 during each migration through the Valley.

The diverse habitat in the SLV, with its elevations ranging from 7,600 to over 14,000 feet, is impressive. Over 360 bird species have been recorded in the Valley and surrounding mountains. At the Great Sand Dunes National Park and Preserve alone, over 250 bird species have been identified, including the migratory Great Blue Heron, American Avocet, and Cedar Waxwing.

Whether nesting, breeding, feeding, or resting, all species migrating through the San Luis Valley depend on wetlands. Wetlands are highly productive ecosystems that exist in low-lying depressions in the terrain. Known as the “kidneys” of the Earth, wetlands filter pollutants, excess nutrients, and sediment from surface waters. They are also essential for groundwater recharge and flood/erosion control.

The SLV supports migratory species, in part, because of its diverse seasonal wetlands. In an analysis submitted to the Bureau of Land Management on SLV habitats and bird migration, Animas Biological Studies, a small organization dedicated to wildlife conservation through applied scientific research, determined that shallow emergent and playa wetlands are “the most critical habitat type for migratory birds in both spring and fall”.  Shallow emergent wetlands are believed to be the SLV habitats most densely populated by migratory shorebirds and waterbirds. Playa wetlands, which are some of the Valley’s most unique habitats, are intermittently saturated by surface or groundwater, and they have high soil alkalinity.

According to soil scientist and field ornithologist John Rawinski, playa wetlands are the most critical wetland habitat because they host species that cannot survive in other environments. For example, SLV playas represent the largest nesting area for the Snowy Plover, a threatened North American shorebird that thrives in dry salt flats.

Wetlands are the Valley’s most valuable and vulnerable ecosystems. Representing only 2% of Colorado’s total area, wetland and riparian habitats support over 80% of wildlife species throughout their lives. Unfortunately, wetlands conservation has been historically insufficient.

Cody Wagner, Conservation Program Manager at the Ian Nicolson Audubon Center, laments that too many people undervalue wetlands. These habitats, he shares, “have been historically viewed as a waste of space”. As a result, wetlands have been intentionally drained, burned, converted into cropland/developments, or polluted throughout the US.

Due to reduced precipitation, drought, earlier peak runoff, unsustainable agricultural practices, and high water demands, wetlands in the SLV have suffered. Wetland Dynamics reports that nearly half of the Valley’s total wet acres have been lost since the 1980s. Wetlands degradation reduces habitat availability and clusters birds into the few remaining viable wetlands. According to a study under the Society for Conservation Biology, wetlands overburdened with high bird densities can cause “the destruction of wetland vegetation, impose heavy losses in local agricultural crops, increase the risk of infectious disease outbreaks, and decrease water quality”. Furthermore, crowded habitat is detrimental to the overall longevity and health of wildlife.

Defined as the interface between a river or stream and the surrounding terrain, a riparian area is a hot spot for migratory species. Offering shade, shelter, and nourishment, riparian habitats are sanctuaries for SLV birds, such as Bullock’s Oriole, Great Horned Owl, Northern Flicker, and the American Kestrel. Riparian habitats are also sparse. Supporting roughly 80% of resident bird species, riparian areas represent only 3% of the Intermountain West’s landscape.

Intersecting the SLV near Del Norte, the Rio Grande supports imperative riparian habitat and offers safe passage to countless migratory species, including the Sandhill Crane. The San Luis Hills State Wildlife Area protects 4.5 miles of the Rio Grande, which is considered “Critical Habitat” for the federally endangered Southwestern Willow Flycatcher. The surrounding uplands host Sage Thrashers and Mountain Plovers, both of which are suffering population declines.

Excessive water use of the Rio Grande has become a growing concern. Currently, high demands by agriculturalists coupled with the impacts of climate change continue to tax this critical water supply. The Upper Rio Grande is projected to decrease in volume by one-third in the coming years.

Over 90% of historical wetland and riparian habitats along the Rio Grande Corridor have been lost in the last 150 years.

Renewable Water Resources proposes to remove 22,000 acre-feet of SLV water from the deep aquifer each year by running a series of connected pipelines through Poncha Pass. This trans-basin diversion would transfer local water to growing municipalities in the Front Range at the cost of SLV’s economy, ecology, and future. The health of the shallow aquifer, as well as the wetlands and rivers that sustain life above it, are put at risk.

The resident and migratory species of this Valley are counting on us to protect our water.