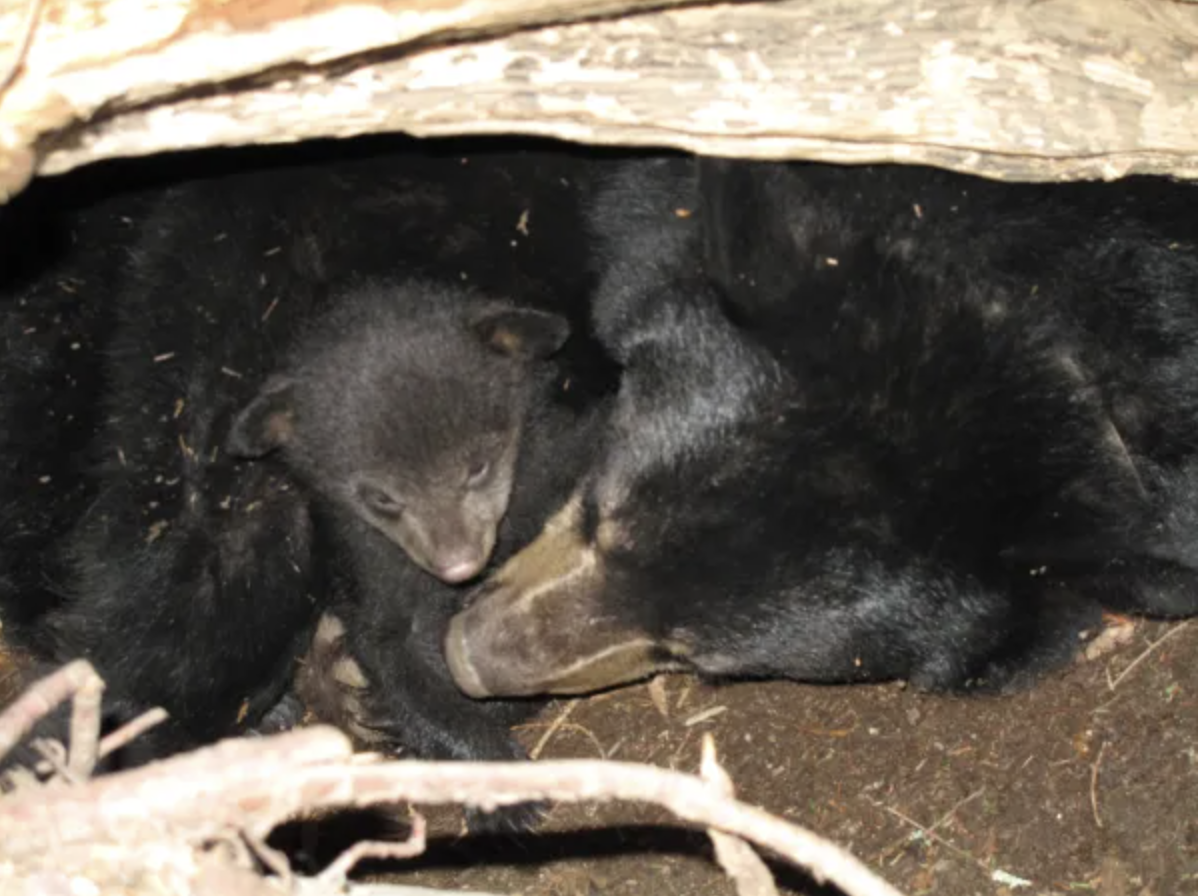 As we endure months of piled-up snow and below-freezing nights, many of us naturally adopt a slower pace and richer diet during the winter. Our high-altitude neighbor, the black bear, takes this notion to the extreme. Inactive for nearly half of the year, bears are some of the most iconic species to hibernate in North America. Their impressive winter behavior brings up many questions for us non-hibernators:

How and why do bears hibernate? How can humans support them in doing so? How might climate change impact black bears? Did humans ever hibernate?

What happens during hibernation?

In late October to mid-November, black bears begin to settle into their winter homes, AKA their hibernacula (dens, caves, or hollowed out trees filled with insulating leaves). While winter temperatures in Colorado are often harsh, bears do not hibernate because they are cold, but because their food supply is drastically reduced. To cope with months of hunger, bears are programmed to conserve energy by entering a state of extremely limited activity and notable physiological transformation, called torpor.

According to Colorado Parks and Wildlife, during hibernation a black bear’s metabolism and heart rate reduces by up to 50-60%, they lose 20-30% of their body weight, and their body temperature drops by around 12°F. Furthermore, food, water, and therefore, waste elimination, are nearly completely halted for up to 200 days, until they reenter the world in March or April.

Many of us might think that bears sleep continuously without arousal for months. However, bears can awaken at any point during the winter months, and many researchers argue that they must do so to avoid sleep deprivation. For this reason, some biologists argue that bears are not true hibernators, as they can be easily awoken. For example, pregnant bears break torpor to give birth to their cubs, and later to nurse and tend to them. Threats or alarms may also be reason for a black bear to stir about during their long rest, and even a brief meander out of their dens is not unheard of.

Key to a successful hibernation is food. In order to produce adequate fat reserves, black bears need to eat around 20,000 calories a day in the months leading up to hibernation. This massive caloric intake is similar in quantity to eating 30 Burger King Whoppers a day, reports Bear Smart Durango. Amazingly, most of these calories will be derived from vegetation: fruits, berries, nuts, and grasses. Insects and the scavenged remains of wildlife provide additional nutrition, about 10% of the diet. In late summer/early fall, black bears may spend up to 20 hours each day foraging for their favorite foods, including elderberry, rose hips, serviceberry, chokecherry, and acorns. If available, black bears will consume up to 30 pounds of berries and acorns in a day alone before beginning hibernation. It is no wonder that a bear preparing to hibernate may gain 3 to 4 pounds of fat each day.

Unfortunately, if there is not enough natural food selection for bears during early fall, they will seek food elsewhere. With powerful noses that can pick up scents miles away, the temptation of fast calories found within human communities often brings bears to the trashcans, bird feeders, doorsteps, gardens, chicken coops, or cars of human residents. Once bears grow accustomed to these easy feeding opportunities, they will often return again and again, abandoning their search for natural foods found within their foraging habitats.

As many locals know, bears who have become accustomed to human foods can cause extreme property damage, and tragically be killed by wildlife officials, residents, or vehicles. To both protect your property and the lives of this hungry native species, help bears stick to their natural diet. This month, and into November, be sure that your trash is secured in a bear-resistant container and put out only right before pick up, that food products are not left in cars or by open windows, that birdfeeders are empty, and that live stock, compost piles, and gardens are bear-proofed. In simple terms, keep strong odors to a minimum, especially during the months of April-November when bears are most active.

Like all wildlife, bears are closely attuned to changes in temperature. If estimates are correct, average temperatures in the Rocky Mountains will rise in the coming years. This will trigger bears to hibernate for shorter periods, meaning they enter their hibernacula late and exit early. After conducting a study on 131 black bear dens near Durango, CO, biologist Heather Johnson found that “For every 1°C increase in winter minimum temperatures, bears reduced hibernation by an average of 6 days.” She further warned that by 2050, temperature increases could shorten black bear hibernation by 15 to 40 days.

This disruption in a bear’s biological rhythm could unfortunately cause both imbalances in the surrounding food chain and ecosystem, as well as increased human-bear conflicts. If bears become active for more weeks of the year, their hunger may send them onto the doorsteps of human residents        with greater frequency. An increase in property damage, ecosystem disruption, and bear mortality may result.

Johnson explains that in addition to warming temperatures, black bear hibernation can be shortened by the availability of “anthropogenic subsidies” such as those from your trashcan.

Some experts even suggest that if a bear detects that there is a consistent food source year-round, they will forgo hibernation all together. A 2019 tweet by Colorado Parks and Wildlife reported: “It’s bitterly cold with snow but urban bears are not in hibernation. They may stay active all winter if they have a reliable source of food. Of course, that source is usually human garbage cans . . .” Consider this a further incentive to be Bear Aware. 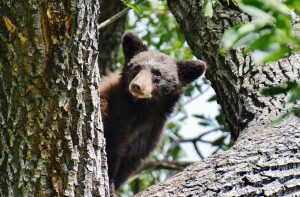 Did humans ever hibernate?

Bears are not the only species to hibernate. In fact, many species do in one way or another, including some turtles, skunks, groundhogs, bats, bumblebees, snakes, and frogs to name a few. It is even possible that humans once hibernated.

Early humans, living during extreme glaciation periods, may have hibernated suggests a 2020 study by paleoanthropologists Juan-Luis Arsuaga and Antonis Bartsiokas. Dozens of fossilized human skeletons, and an abundance of teeth and shattered bone, rest in the Spanish cave called Sima de los Huesos (The Pit of Bones), making it one of the top hotspots for archeological discovery.

After studying the contents at Sima de los Huesos, Arsuaga and Bartsiokas discovered that many of the cave’s fossilized remains showed signs of seasonal lesions, injuries, delayed/erratic growth, and deficiencies that are similarly found in animals that hibernate. Humans living over 400,000 years ago in this part of the planet, the researchers concluded, likely slept for long stretches of time and slowed their metabolisms so to survive treacherous winters that offered little to no relief from hunger and cold. The study, “Hibernation in hominins from Atapuerca, Spain half a million years ago” can be further reviewed in the prehistoric science journal L’Anthropologie.

While humans do not hibernate today, we can still support this important behavior in other animals. Black bears offer a variety of ecosystem services and deserve to be protected. Do your part this fall by ensuring that your property is bear-proofed and does not attract wildlife.

Information on black bears sourced from Colorado Parks and Wildlife, Bear Smart Durango, and the Journal of Applied Ecology.