Who We Are: Janet Woodman – At home in a pocket of heaven 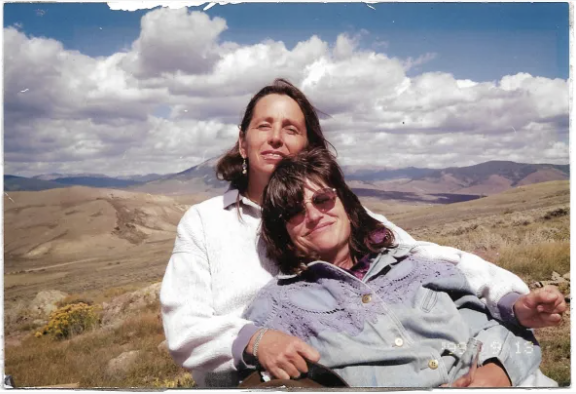 Janet Woodman remembers staring intently out the train window every day during one section of her commute from suburban New Jersey to work in New York City as a young woman. The train passed through a wetlands area—deep grasses, birds, a tantalizing glimpse of natural wildness. She soaked it all in. “Then we’d go underground and come up in Manhattan and I’d trudge to my job.”

Trapped in a world of sidewalks and buildings, she understood how her father had felt for years. “He hated the city. He should have been a farmer,” she says and then smiles, adding, “He’s where I get my love of gardening.” Instead her New Hampshire-bred father worked in New York City’s garment district and later as a stockbroker in Concord, NH. As a child growing up in Concord, Janet would ride with him along the state’s back roads, looking and listening as he pointed out and admired working farms with old farmhouses and barns.

As she recounts her story, Janet is sitting at a long wooden kitchen table in Crestone’s version of a well-loved home with historic roots, where she lives with her wife, Kizzen Laki. The hand-hewn cedar log structure was once a bunkhouse for ranch hands at an old ranch west of town. Years ago Kizzen and her then-husband were offered the building to dismantle and use for firewood. Instead they moved it to a high spot on their property in Crestone where it eventually became Kizzen’s home. Today it sits above extensive vegetable and flower gardens, beehives, fruit trees, and a greenhouse for vegetable starts and tomatoes, all profuse with color and ready-to-harvest bounty at the end of a summer of relatively generous rain.

Next to the gardens is Janet’s long-awaited dream: her own studio space for making art, for gazing out over the valley and up toward the mountains, and for sitting with friends on the screened porch, resting and catching up after a morning of gardening. She designed and Kizzen’s son Talmath is building the frame structure, whose west side is several feet above the sloping ground. Her studio, the house, and everything else on the off-grid property is powered by the sun through a more-than-sufficient photovoltaic array.

A circuitous path to herself

The wide circle of Janet’s life, from rural dreams to realized dreams, has passed through city phases and other detours but always contained important constants. Among them, a passion for art and for language, a deep appreciation for sustainable ways of being on the earth, and enjoyment of a physically active life. She remembers as a child loving to draw, encouraged by her mother who also had artistic inclinations. She treasures memories of fishing, skiing, and playing catch with her father, the start of a good softball throwing arm.

In high school, an inspirational English teacher provided Janet with a strong grounding in writing and editing, skills she continues to use decades later as proofreader/editor for The Crestone Eagle. In high school as well, and then at Sarah Lawrence College, she took classes in drawing and painting, later studying sculpture at the Art Students League in New York. Meanwhile, her love of language took her to Madrid for her college junior year. Absorbed in the Spanish culture and language and having made good friends, she enrolled in masters courses and remained in Spain for her senior year. Following graduation she married, lived in suburban New Jersey for ten years, and worked in commercial art, also learning about offset printing at a print shop job.

Janet’s liberation from city life came after her divorce in 1979, when a friend suggested she move to rural Vermont. From there she spent five years in the Catskill Mountains of New York. In each place she did commercial art, creating logos and ads and producing other types of graphic design. Then came another form of freedom, into a fuller and more authentic sense of herself. Living near Woodstock, she joined a women’s softball team. Her new friends, mostly lesbians, dissolved old apprehensions she’d held about strong-looking women. “They had such an irreverent sense of humor and were having a great time,” she says. “Being around them gave me permission to be myself and come out.”

One day during that time, a carpenter friend was in Janet’s art studio complaining about not being able to find good help. Ready for a change, she said, “George, hire me!” He did, training her on the job in the basics of carpentry and so pleased with her work that he added other women to his crew. When she realized he was working without drawings or design plans and needed help communicating with clients, Janet took a community college course in architectural drafting. She combined that with knowledge from having previously studied sustainable home design—how to site a home in harmony with topography, neighboring structures, sun, and wind.

Another major change took place in 1988. An East Coast friend of Janet’s moved to Moffat and bought a ranch where she planned to establish a women’s retreat center. Visiting, Janet fell in love with the San Luis Valley. She and her then-partner lived on the ranch for five years. When the ranch owner moved on, Janet bought property in the Grants and designed a small strawbale house, putting it up with help from friends and professional builders. She lived there for ten years.

When Janet and Kizzen first met, Kizzen had just started a small local newspaper she called The Crestone Eagle. “With the first couple of issues I realized she really needed a proofreader,” Janet laughs. She took on the job. Over the past 32 years her involvement with the Eagle has also included editing, writing, selling ads, making lunches, and numerous other behind-the-scenes tasks. For many years she hosted a monthly World Music program for KRZA public radio in Alamosa. For four years she was actively involved with Crestone Baca Resiliency’s Energy Group, helping make solar power more available for local residents. All of this, and of course the garden, have her deeply rooted in this place.

“The natural beauty, a great group of friends, and the love of my partner—I just feel like I’ve arrived in heaven,” she says, “I really do.”