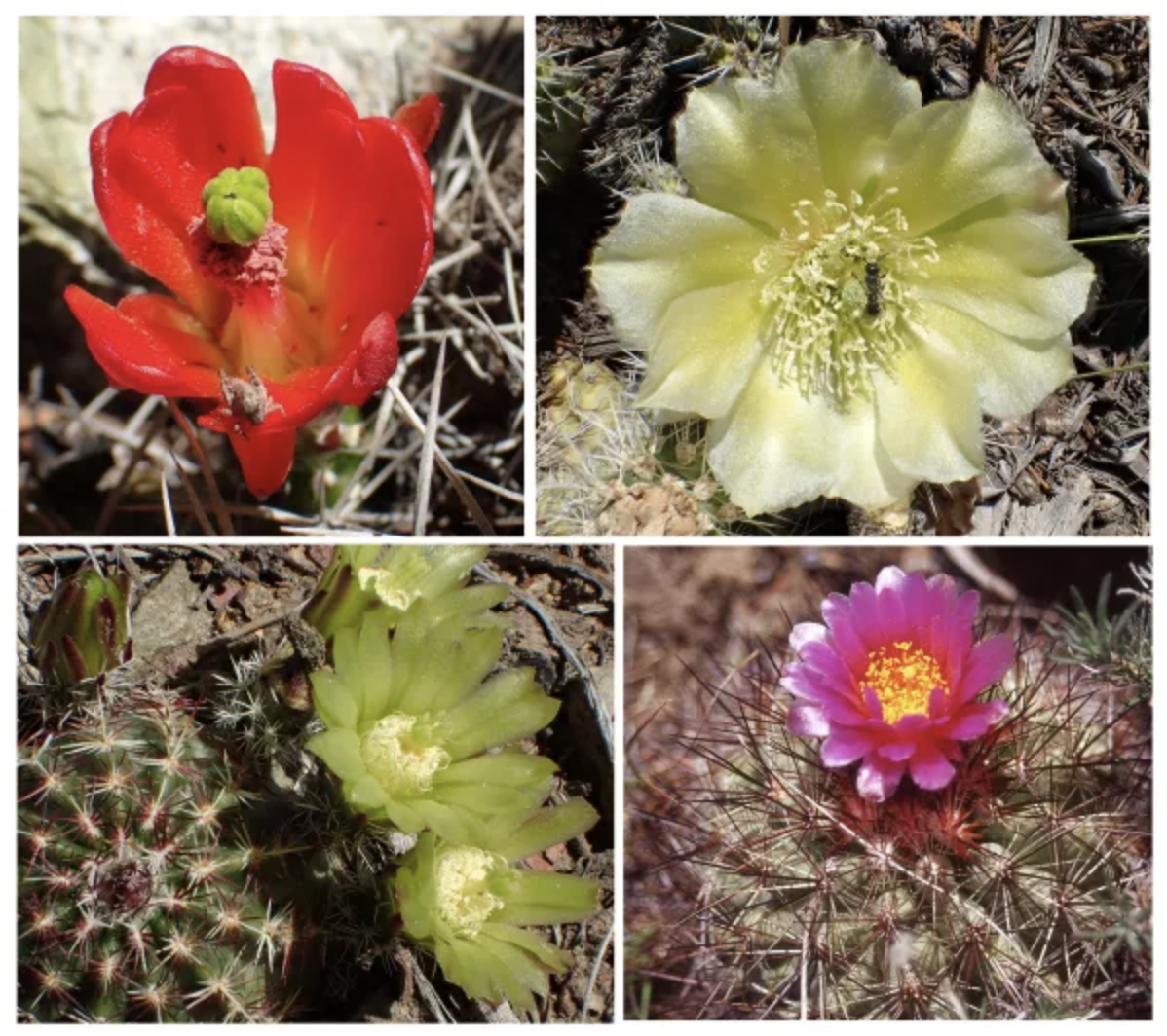 If there is one local plant you should know, it is the prickly pear cactus (or Opuntia polycantha). No plant can do more damage to us, or our pets, stepped on or brushed against. Outside their edible fruits and pads, they are covered with large and small spines.  The large ones can penetrate a casual sandal, and the small ones (also called glochids) can burrow into our flesh, aided by barbs and hooks.  There are four other cacti around Crestone, all loaded with spines, but all are much less common than the prickly pear.

They are so strange appearing, other than their green color and the brief summer flowers, you’d almost think they are not plants at all. Where are the leaves and branches?  If you look at them carefully (and watch that you are not punctured!) you can find leaves on the very young pads.  On plants other than cacti, leaves produce a bud at their base that can produce a branch, flower, or more leaves.  In cacti, the leaves soon shrivel but the bud develops into a permanent structure, the aereole, and from them the actual spines develop as modified leaves. Some aereoles near the tip of a prickly pear pad can develop into a new pad (or stem), and near the base of a columnar cactus can produce another vertical column, like our hens and chickens cactus.  The elegant spiral patterns of aereoles on a thick cactus stem come from their early development as leaves.

Besides the prickly pear, we also have the small multi-columned hen and chickens (Echinocereus viridflorus), the larger multi-columned claret cup cactus (Echinocereus triglochidiatus) and the swollen ball of the Miller’s pincushion cactus (Pediocactus simpsonii).  Cacti are native to the new world, with about 1750 different species.  Most live in the deserts of south and central America, all the way up to southern Canada (both our prickly pear and pincushion cactus are found in British Columbia and all the way down to northern Mexico, and I knew them from Eastern Washington). The ancestors of the modern cacti lived on the super-continent of Pangaea. When it split into eastern Gondwana and western Laurasia 150 million years ago (about when flowering plants appeared) the cactus ancestors moved with Laurasia, which later formed South and North America.  So, the cacti are pretty much limited to the new world, except for a little pencil cactus that made it to West Africa and Sri Lanka, its sticky seeds probably carried by birds.  A few cacti evolved into rain forest epiphytes, but most stayed on the ground, and their greatest diversity is in Central America into the southwest (Mexico has 670 species, New Mexico 57 species and Colorado only 15).

Cacti have evolved some unusual adaptations for survival in the deserts where they flourish.  First, is how they make a living—capturing sunlight, storing water, and avoiding being eaten.

The leaves of most other plants take in carbon dioxide and lose water vapor through pores, the stomata (generally about 20 to 1, water to carbon dioxide).  Most of the moisture in the water cycle is provided by that water vapor, and most plants need a continuous supply of water.  Cacti, with no leaves, have stomata on their thick branches. They keep them shut during the day and open them at night. This trick was first discovered by botanists in Europe studying succulents of the Crassulaceae family. This includes our little alpine yellow-flowered stonecrop and the crassulas of European mountains—and the jade plant (popular in Crestone, even some with pet names). So, this metabolic trick is called Crassulacean Acid Metabolism (or CAM for short). By opening their stomata at night and storing the CO2 as organic acids in the interiors of stems, they avoid losing much water vapor since the temperatures are low and the humidity is high. During the day, when the temperature rises and humidity drops, inside the stems the acids are broken down to release carbon dioxide which is supplied to green tissues where photosynthesis occurs. The enzyme rubisco (its acronym reminds me of a breakfast cereal) adds that carbon to make sugars.

CAM requires thick tissues for nightly storage and daily release. Cacti are great CAM examples, but other succulent plants have the same trick.  Since cactus stems expand and shrink with the availability of water, their means to do so involve pads (that thicken or shrink) and stems (balls and columns) with spines on ridges allowing rapid changes in diameter.  Thus, the thick stems store water and help store CO2 at night.

The stems of cacti, like our prickly pear, are juicy (about 88% water, 9% carbs, and the rest a little protein and minerals).  This is a potential food source for desert animals, but the spines are an effective defense to most.  Spines are almost universal in cacti, except for the small number of hallucinogenic ones (probably poisonous to animals), such as the peyote cactus and close relatives, and cacti we’ve bred.  Since humans have been on the scene in the Americas, they have figured out ways to remove the spines, mechanically or by burning, to enjoy the cactus flesh, not just the pads (named nopal in the Nahuatl language) but also the fleshy fruits (tuna).  I bet students at the Earth Knack School in the Baca learn how to prepare them.

Cactus flowers are usually attractive, even spectacular, in appearance. They are produced at the tips of thick stems, with lots of colorful petals and sexual parts (stamens and pistils).  The flowers produce both nectar and abundant pollen, providing rewards for a variety of visitors.  They generally develop into fleshy fruits with the small black seeds distributed in the flesh. Cacti are among a small group of plants that produce unique pigments, called betalains. These are derived from an amino acid, tyrosine, the same molecule that is made into mescaline (3,4,5-trimethoxyphenethylamine!). Betalains vary from yellow to purple, coloring flowers and even the flesh of fruits. The pigment name comes from its first discovery in beets (Beta) and spinach.  Some of us may notice this pigment after consuming a bowl of borscht and finding that our urine and feces turn dark-red the next day.  These pigments have some value as vegetable dyes among the native peoples of the region, but the best-known cactus dye, cochineal, is actually from a scale insect that feeds on certain prickly pear cacti.

Enjoy our native cacti but be careful!