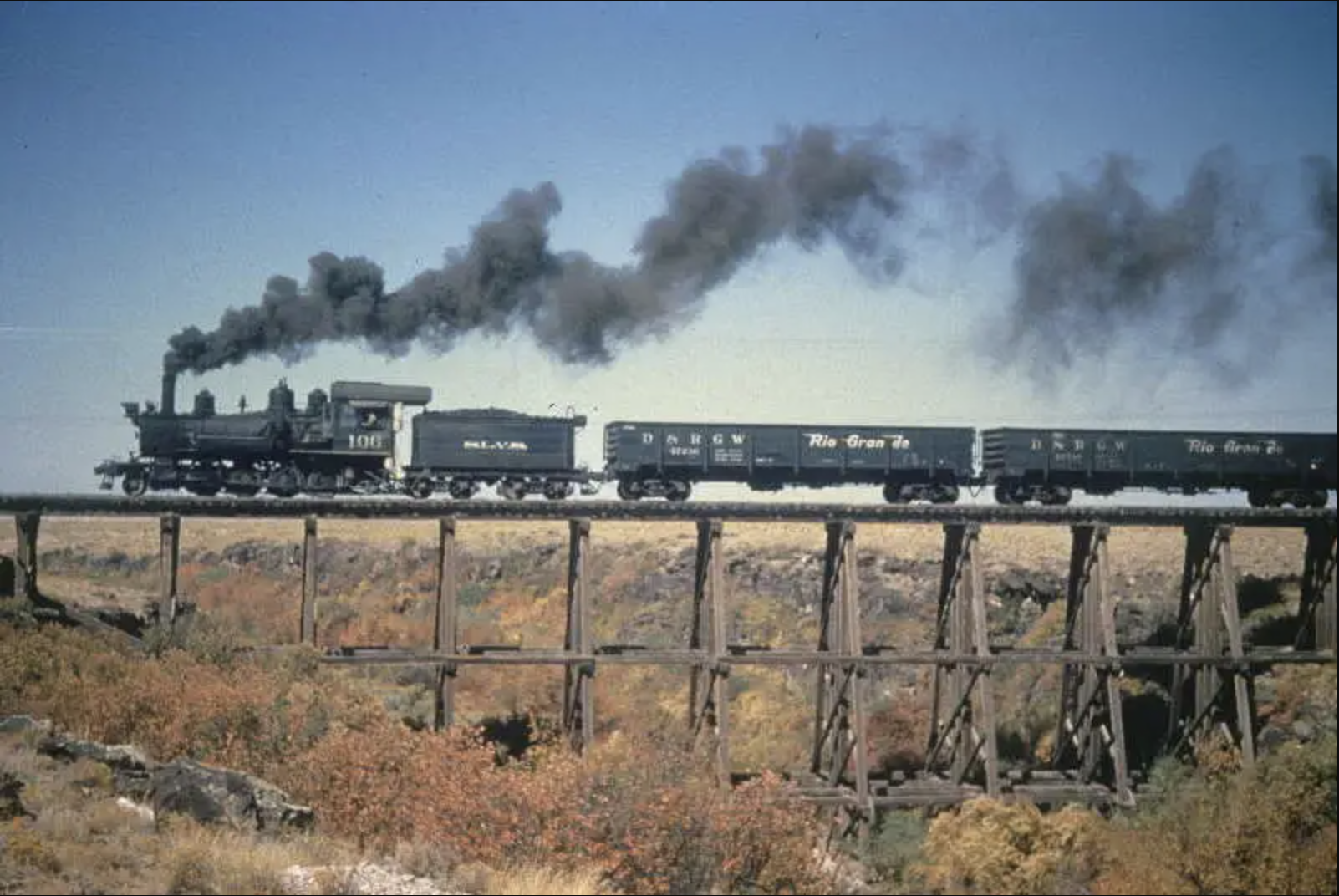 Back in the 1850s the US Army was ready to abandon Fort Massachusetts at the west end of La Veta Pass. The fort’s location on swampy land six miles northeast of the site that still houses Fort Garland was far from perfect. The new fort, named for Brevet Brigadier General John Garland, a US Infantry Commander of the Department of NM, was established in 1857, just ten years after the Treaty of Guadalupe Hidalgo made this territory part of the United States. Fort Garland was located at the mouth of Ute Creek Canyon. The old fort was constructed of cottonwood logs, whereas the new parallelogram-shaped fort was built of sturdy adobe bricks which made for thick strong walls.

San Luis Valley (SLV) historian George Harlan, commenting on the choice of a location for the new fort, said, “besides protecting the settlers, it sat at the junction of the two main thoroughfares of travel in and out of the Valley . . . namely the Old Taos Trapper Trail and the New Mexico California Trail”, now called the Old Spanish Trail. Activity on these busy routes could be easily monitored from Fort Garland. The fort and the Town of San Luis to the south, the oldest town in Colorado, both got the first US Post Offices in the SLV in 1862. Famous scout Kit Carson was stationed at the fort for many years. Mountain man Tom Tobin was sent to find and capture the Espinoza brothers, murderous outlaws who had the region scared out of its gourd. Tobin brought the hands and feet of the outlaw brothers, who had died rather than surrender to Fort Garland, as proof of their demise.

At the beginning of the United States Civil War armed troops were stationed at Fort Garland. In fact troops from the fort joined other US Cavalry troops in the only battle of the Civil War fought in the west. The Battle of Glorieta Pass in March 1862 is called the “Gettysburg of the West. “The stupendous loss the Confederacy took at this battle, which raged for two days west of Santa Fe, stopped once and for all Confederate incursion into the western territories.

The 9th Cavalry regiment of Black Americans, called Buffalo Soldiers, were stationed at Ft. Garland from 1876 to 1879. In 1876 troops from Fort Garland marched to the La Plata area to prevent conflicts between the Utes and miners. In 1877 the troops were tasked with removing white “settlers” from the Ute territories. George Harlan says, “After playing a strategic role in the white settlement of the SLV, Fort Garland was closed on September 25, 1879.”

An early settler to the Fort Garland area was Joseph Hoffman, who claimed to be the illegitimate son of Austrian Emperor Franz Joseph. According to his story Hoffman came to the US after being a participant in an unsuccessful German insurrection. He settled in the Fort Garland area in the 1850s after paying a doctor in Ohio $25 to sign a death certificate so he’d not be pursued for indiscretions in Europe. Hoffman made a living in the SLV as a freight hauler and a real estate agent. According to historian George Harlan, as Hoffman aged he loved to spin a tale. Harlan writes, “with a chuckle, Hoffman would tell of attempting to drive a herd of hogs to Leadville from the northern SLV. Well, he arrived in Leadville swineless. Seems Hoffman had become disgusted trying to keep the hogs in a herd and moving in the same direction. He just sold them along the way to ranchers and hungry folks.”

Garland City, six miles due east of Fort Garland, was a dip in the road when in 1877 the Big Hill Stage Station opened up shop there. The station boomed until in 1878 when the railroad came to town. William J. Palmer of the Denver and Rio Grande Railroad (D&RG) built a line to Pueblo in 1869-1870. In 1872 he began to extend D&RG rails over La Veta Pass to Garland City.

In June of 1878 the railroad came to town with the town onboard. The D&RG, like many railroads pushing into the sparsely populated west, carried everything to build and deconstruct a town on the rail cars they pulled. The railroad would erect a town in a couple of days and break it down when the rails were laid to the next stop. Historian Virginia Simmons says “A typical, temporary end-of-the-track town, Garland City consisted of about a hundred buildings, including Perry’s Hotel, which were hauled in and tacked up during the first days of the town’s existence. Such construction had to be quick for the town was to last only until the town was moved on to Alamosa within a year.”

Soldiers from the abandoned Fort Garland who had nothing to return to in the east settled all over the SLV and some stuck around the area of the old fort. Some citizens from Garland City moved near the old fort rather than heading west with the railroad. Immigrants soon settled there as it was a great location for trade. Fort Garland today is an unincorporated town still benefiting from being at a crossroad. The renovated old fort is a museum and well worth a visit.

In 1857 the railroad moved west across the SLV and Alamosa was the next stop. Land was cheap there as few had settled in that marshy cold place among the cottonwoods. Even now Alamosa is one of the leaders each winter in the national lowest-temperature contest. Originally the town site for Alamosa was known as Rio Bravo. Alamosa means “place of the cottonwoods” in Spanish. In May, 1878 A. C. Hunt, a surveyor, platted the town site for Alamosa and two months later the train arrived in town. George Harlan tells us, “The first train to Alamosa carried: two hotels, and a saloon. The Occidental Hotel and the Broardwell  served breakfast to patrons in Garland City and dinner to new guests in Alamosa. The same was true of the Gun Saloon, which quenched the thirst of the miners in the morning and dispensed drinks to the residents of Alamosa in the afternoon.”

Alamosa became a railroad hub in the SLV and this made the town the commercial center which it is to this day. There were two banks: the Bank of San Juan and First National Bank. Mills and stores began to be built in the busy new town. New businesses popped up in Alamosa like mushrooms after a rain. The two freight companies Field & Hill and FS Struby & Company made their money supplying miners in the San Juans. They also ran general stores. Everything from new citizens to supplies and livestock was coming into town over the rails. Two newspapers the Colorado Independent and the Alamosa News covered activities in the growing town. By 1880 Alamosa had a school and a church. Several stage lines started up to take settlers to remote ranches and mining claims.

Railroads were soon crossing the SLV and down to New Mexico. Lines were laid to Antonito and then onto Española, NM. A narrow gauge line was created to service Chama, NM. This train, the Cumbres Toltec, still runs today and is well worth a trip as it traverses spectacular scenery without road access. In 1881 a D&RG line from Alamosa to Monte Vista was completed. A line from Monte Vista to Center was constructed. Railroads were a big industry in the SLV well into the twentieth century. They provided many jobs from Poncha Pass to Antonito, Fort Garland to Monte Vista and many places in between.

Between Fort Garland and Alamosa lies the little town of Blanca, located under the massive southern flank of Mount Blanca. One of Colorado’s “fourteeners”, the peak has been a landmark for travellers for millennia and is called Sisnaajini by the Navajo/Dine. The peak is one of their sacred mountains. The little town, named for the mountain, was incorporated in 1909 as part of the Costilla Estates Development, which held a land lottery at Fort Garland. They awarded small plots of land  to encourage settlement of the SLV by immigrants from all over the world. The Town of Blanca became the headquarters for the Trinchera Irrigation District.

Luther Bean, in his history Land of the Blue Sky People, says, “most tracts were five acres in size and owners found it impossible to earn a living on such a small farm.” But Blanca continued on. In the early twentieth century there were 1500 souls that claimed the town as home. The town had three hotels, two banks, six real estate businesses, three newspapers, two lumber yards and a concrete block company.

In 1909 the Southern SLV Shortline Railroad was chartered as a branch of the D&RG lines and headquartered in Blanca. The original plans were for this railroad to go down to Taos, NM. The line got to Jaroso near the state line between Colorado and New Mexico and no further. But the little railway carried passengers and goods, mainly produce, between Blanca and Jaroso,  then onto markets on the eastern slope until 1958.  After that the railroad still ran sporadically, mostly hauling produce, until 1994. According to the 2020 census there are currently 391 people living in Blanca.

While the train traffic in the SLV now is mostly for tourists and pleasure trips, Luther Bean reminds us of the days when “the Valley was covered from east to west and from north to south with railroads. Of the early settlements only San Luis and Saguache were without railroad service.”