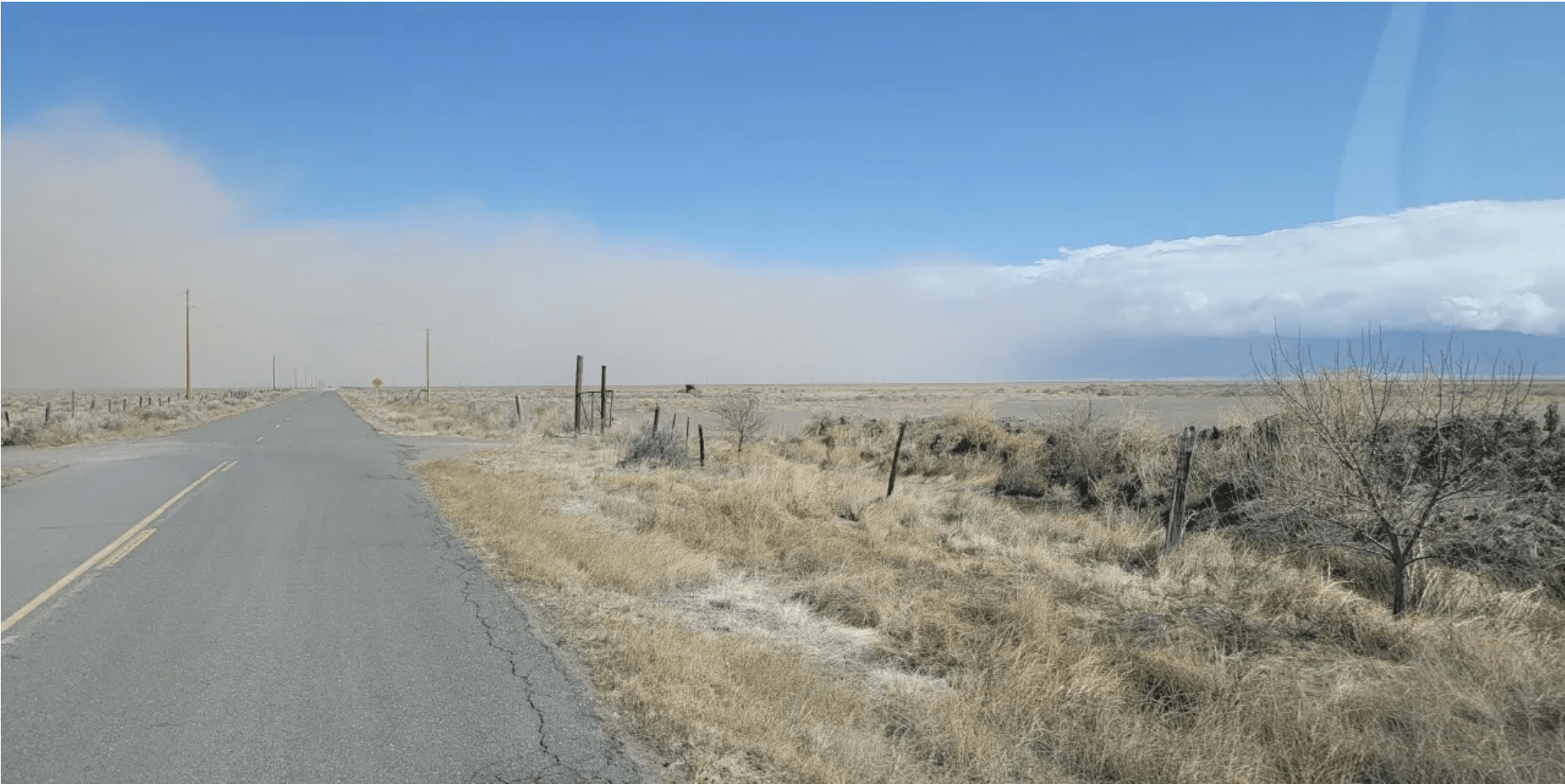 Within the past 25 years climate in the northern San Luis Valley has changed significantly. As shown by data herein, rising temperatures and falling precipitation are impacting our snowpack, rainfall, stream flow; and indirectly, groundwater levels, vegetation, and fire danger. This article looks at long-term trends in the above parameters, and what we can expect in the future; warmer, drier, and windier conditions.

Since 1900 Colorado average temperature has risen 2.5°F, with 2/3 of the rise occurring since 1975. In the SLV mean annual temperature rose 2°F since 1913 (Fig. 1). Roughly 2/3 of this rise occurred rapidly since 1985. Warmer Colorado temperatures mean more evaporation from water bodies, more transpiration from plants, and thus drier forests and grasslands.

In the 1860s-1870s Gold Rush miners pushed into all the highest ranges of Colorado and discovered many small glaciers, some of which (like the Blanca Glacier) they tunneled into looking for gold. Some of these glaciers have now shrunk or disappeared, indicating a warmer, drier climate since the 1860s. In the San Luis Valley, William Gilpin described a different kind of climate evidence in 1860:

“The San Luis parc . . . is watered by thirty-five mountain streams, which, descending from the encircling crest of snow, converge nineteen into San Luis Lake, the rest into the Rio del Norte . . . The San Luis Lake, extending south from the point of the foothills, occupies the center of the parc for sixty miles (see Fig. 2). It forms a bowl without any outlet to its waters.” —William Gilpin; Mission of the North American People, 1860, p. 78-79. 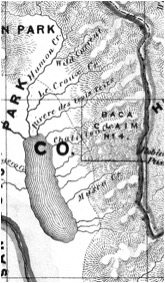 To maintain such a lake would require cooler and/or wetter conditions than exist today. Later authors (e.g. McCalpin, 2011) interpreted Gilpin’s “lake” to be a slight promotional exaggeration, likely representing a network of marshes and wetlands that existed in the snowmelt season of wet years.

The oldest stream gage records in the Crestone-Baca area began in 1948, and thus span the creation of the Baca Grande (1971) to present (Fig. 3). Between 1971 and 1995 there was a slow increase in average annual stream runoff. But note in this 24 years, below-average years (15) outnumbered above-average years (9), so overall it was a dry period. Likewise, from 1995 to 2021, below-average years (14) outnumbered above-average years (12). Graphs are sometimes misleading, unless you read between the lines. Longer-term trends in runoff can be gleaned from stream gages on the Rio Grande (back to 1891; Fig. 4). One can clearly see the post-2000 decrease in streamflow, which mimics that seen in N. Crestone gage record. However, in the N. Crestone record the decreasing flow trend began about 1995, rather than in 2000. 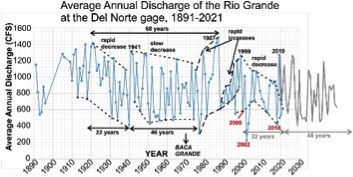 In the past 1000 years tree rings at Great Sand Dunes NP indicate 12 droughts (Fig. 5), which range from 20 to 62 years long (average 40 years, standard deviation 13 years). However, all droughts prior to 1870 were not affected by man-made CO2 emissions. The latest two droughts were 47 and 30 years long. Thus, our current 22- year drought may be only half over. 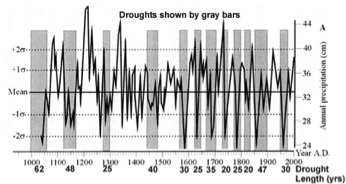 In pre-drought and pre-global warming Colorado, snowpack slowly accumulated in the mountains from Oct. to April, and then rapidly melted in May and June. This pattern has now shifted, with peak snowpack occurring a month earlier and snowmelt runoff peaking as early May 10.

This year (2022) we had no measurable precipitation from April 4 to May 20, a span of 46 days. This dry period decimated the snowpack, which was well above-average the first week of April. Snow rapidly disappeared at lower elevations by April 20 (Fig. 6). As of May 18, snowpack in the Rio Grande basin was only 2% of normal for that date (Fig. 7). Basins farther north received snow from spring storms and thus fared much better, although all were still below-normal on May 18.

In 2018 peak flow of the creek was only 10 cfs (19% of normal), and occurred very early (May 10). The creek did not flow in town in summer, and as a result many shallow wells at summer cabins went dry, the first such occurrence in more than 75 years, according to cabin owners.

Recent press reports on the “megadrought”, citing university researchers, conclude it is the most severe drought in the past 800 to 1200 years. In early May main reservoirs on the Colorado River fell to 24% capacity (Lake Powell) and 31% capacity (Lake Mead). The low levels triggered mandatory cutbacks of water deliveries to cities such as Las Vegas and Phoenix, the first time since the dams were built (1956 and 1931, respectively). 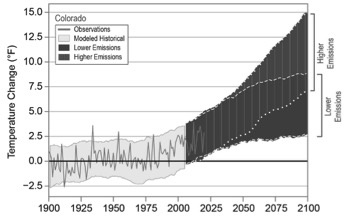 Future drought severity depends on the trajectory of global warming and the success in bringing down greenhouse-gas emissions. As shown in Fig. 8, predicted temperature rise in Colorado in the next 75 years ranges from +0° to +5°F under a lower-emissions scenario, to +3°to +10°F under a higher-emissions scenario. The lower-emissions rise is the same magnitude as the rise already experienced between 1910 and today (Fig. 1). The higher-emissions rise is twice that large. It is hard to conceive the impacts such temperatures would have on our snowpack, rainfall, stream flow, groundwater, vegetation, and fire danger. And this does not include the impact on groundwater levels from the proposed “Renewable Water Resources” water export from the valley, from a huge wellfield adjacent to Casita Park and the Baca National Wildlife Refuge (see Part 2 next month).