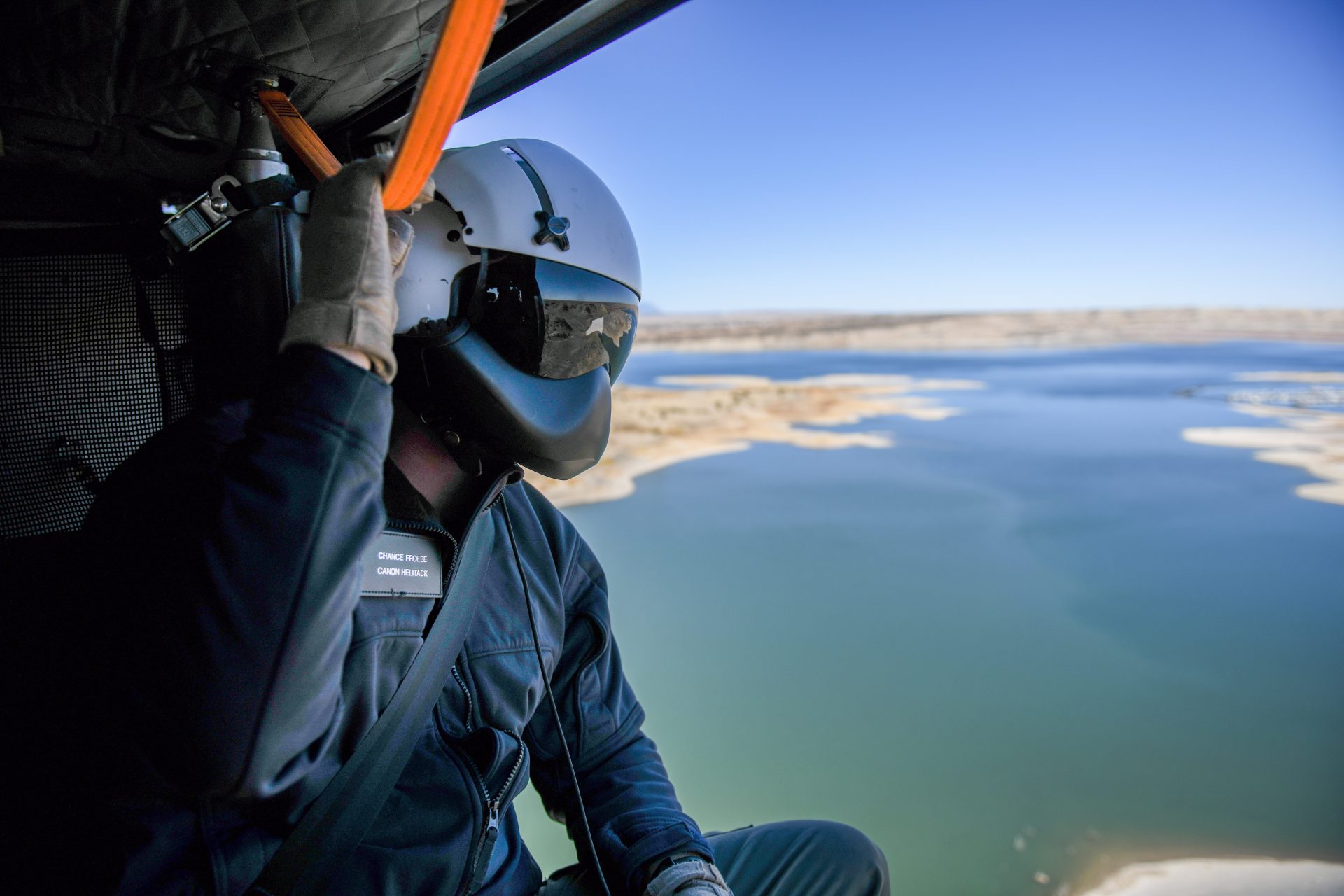 The Sangre de Cristo Mountains attract hikers, climbers and mountaineers from all over the world. Crestone Peak, the Crestone Needle, Kit Carson Peak, and Mount Blanca in particular attract some of the boldest adventurers. As more people venture into the backcountry, search and rescue (SAR) teams supporting climbers essential to mitigating risk and saving lives.

Alamosa Volunteer Search and Rescue, Custer County SAR and Sagauche SAR most frequently respond to “missions” in the Sangre de Cristo Mountains. AVSAR and Custer County SAR partner with Cañon Helitack for rescues involving helicopter insertions, where SAR volunteers are inserted by helicopter at a site which could not be reached as safely or as quickly by ground crews.

In a November training session two hours north of Crestone, Alamosa SAR volunteers met to train with Cañon Helitack, an affiliate of the Department of Fire Protection and Control.

Dressed in flight suits and loaded into a the group’s helicopter, a civilian derivative of the UH-1 Iroquois, or Huey. The bell helicopter is often used for aerial firefighting, the rescue group’s primary mission.

Cañon Helitack is a crew of firefighters transported by helicopter to help stop the spread of wildfires that otherwise could not be reached by ground crews. After clearing a fire, they generally trek over difficult terrain, carrying up to 120 pounds of equipment to pickup points, where they clear the ground for a helispot, or helicopter landing zone.

There are two helitack crews run by the state of Colorado, both operated through the Fire Protection & Control. Cañon City is home to Cañon Helitack, a team of twelve that oversees the Front Range. In Montrose, a team of ten crew members oversee the Western Slope.

Cañon Helitack is the only team in the state that performs STEP, Hoist and uses night vision. STEP, which stands for Single-Skid Toe in Hover Entry/ Exit, is a method of exiting and entering a helicopter that cannot land because of difficult terrain. Hoist is a rescue tool used to lift and lower rescuers at a mission site.

Rescue teams in the Sangre de Cristo Mountains previously only partnered with air medical transport agencies like Flight for Life, Reach, and Guardian Flight (an air medical transport base in Alamosa). Medical helicopters sometimes transport SAR volunteers, but can only insert rescuers when the helicopter can land on both skids. Only helitack has STEP capabilities to insert rescuers closer to rescue sites on technical terrain, reducing the time between when SAR is called and when they reach the rescue subject. The group also helps rescue missions by flying volunteers out after an event, which medical helicopters rarely are able to do.

This past May, Cañon Helitack partnered with Alamosa and Custer County teams to become more involved in search and rescue across the Front Range, the mountains east of the Continental Divide. Stephen Cline, Alamosa member, and Cameron Meganck, assistant captain of Cañon Helitack, spearheaded the partnership.

“For us to have this ability to be more of a Swiss army tool for the state of Colorado–doing fire, search and rescue, parks and wildlife missions, and avalanche work–is one of the best gifts we have is to be first responders,” said Meganck.

The group has responded to every search and mission AVSAR has been called to since partnering in May. The 13 volunteers between AVSAR and Custer County SAR received their first classroom training with Helitack last May. Now each team is trained separately once a month.

They flew 15 minutes to the southeast corner of the Pueblo reservoir, the Cañon Helitack crew’s training site, to practice STEP. Chance Froebe, who joined Cañon Helitack in August of 2022, and Crystal Wilson, AVSAR captain, were unloaded onto a ridge overlooking the reservoir to watch the training.

Ideally, when a pilot flies into a rescue site, there is enough room to land both skids onto a flat, grassy plot of land of at least 100 x 100 feet. Search and rescue missions are often on difficult terrain where fully landing is not possible. Because of this, rescuers inserted by helicopter need to learn how to exit and enter the helicopter through STEP techniques while it is hovering or partially landed.

There are three forms of STEP. A hover STEP occurs when the helicopter hovers a few feet above the ground. A toe-in insertion is where the front of both skids touch a ridge. A single-skid landing is where only one skid lands on the side of a ridge.

During each STEP extraction, SAR members exit the plane in groups of 3 as if they were exiting onto a real mission site.

“There’s been several occasions this year where we’ve had to use it where we would have had to hike in because any kind of helispot was too far away,” Froebe said. “In those several instances, we were able to insert rescuers like this and rescue people.”

Six elite members of AVSAR are on the STEP team. These members were selected by Wilson for displaying talent and commitment to the team. The members from AVSAR are Jeff Tokar, Stephen Cline, Madeline Ahlborn, Zach Koehn, Tyler Loewen, and Curt Howell.

Although Wilson sometimes responds to rescues in the field, she usually works incident. command behind the scenes.

“It is awesome to get out here and see this happen because I never get to. I am crazy proud of this team,” Wilson said. “We handpicked the most prepared team members for sure.”

Ahlborn was selected to join STEP after completing a successful mission using long lines with helitack before AVSAR was trained in STEP.

Nicknamed “Lady” as the only female SAR STEP member, Ahlborn completed several successful STEP exits and entries during the training.

“When I’m in it, it just seems very fluid. I’m not thinking about things that could go wrong. I’m just very focused and aware of where I should be looking, who I should be looking at, and at what times,” Ahlborn said. “Then, if something does go wrong, it’s just reactionary.”

From the ground, Froebe explained the risk of working in helicopters, from high density altitude to steep terrain.

Froebe has lots of experience with helicopters. As a Marine Corps helicopter mechanic/ aircrewman veteran, he is always looking out for the safety of his crew, especially considering the precariousness of rescue sites. Many rescues are from steep shelves at high altitude, such as the Crestone Needle traverse, a narrow trail with a 2000 foot drop on either side.

The Blanca Massif is another popular rescue spot in the Valley. To mitigate risk at this site, Alamosa rescue is getting a permanent landing zone in 2023.

The landing zone will be at the base of Mount Blanca in Alamosa county. Wilson is pushing for a 300 x 300 feet landing, big enough for 2 helicopters to land nose-to-nose. All they need is a final approval by the Forest Service and the Bureau of Land Management, and the project can begin Spring 2023.

“To have a real landing zone and not something we have to make up every time is a game changer as far as helicopter assets go,” said Ahlborn. “And the pilots that come and use this landing zone, they’ll be able to save the coordinates so that every time we have a mission call, we won’t have to resend an updated landing zone location.”

Having a permanent place to land also means that the pilot does not have to worry as much about a “brown out” or a “white out” while landing the helicopter. When a helicopter lands on loose ground, the pilot performs 2 passes over before landing to blow away dirt, debris, or snow that might obstruct the view while landing. These passes are called “high-low recon.” Although the pilot still performs high-low recon over a paved LZ, sight obstructions are less of a concern on a paved helipad.

Hovering over steep ridges, where the rotors were within 5 feet from rocks, pilot Greg Kellogg relies on Meganck to paint a picture of the makeshift landing pad. Through their radio system, Maganck would say, “You’re three feet off the ground,” or “You’re drifting forward” to ensure a safe placement of the helicopter.

Cañon Helitack now responds to more search and rescue missions than fires, so Kellogg is accustomed to working with SAR volunteers.

This past season was the first of three that Kellogg brought back someone alive. Wilson says facing death is part of search and rescue and volunteers have to accept this reality.

“I think one of the hardest things for team members when they join is to understand that we do a lot more body recoveries than rescue missions,” Wilson said. “A lot of people are not capable of doing that. There are things that you will never un-see, you will never un-smell, and never un-feel,” Wilson said. “If you are not prepared to deal with that, this isn’t the place for you.”

Beyond the physical and emotional strain of SAR, volunteers also have to be prepared to buy their own gear.

Wilson shared that a single AVSAR volunteer spends an average of $10,000 on equipment during their time in SAR. Their team vehicle fuel and insurance is covered by the sheriff’s office, but all personal equipment is out of pocket.

While volunteers must pay for their own gear, there are no other requirements for volunteers to join. All rescue skills can be taught.

Rothrock has been on Custer County SAR for 4 years. He is part of their technical rope rescue team medical team, and is the co-captain and training officer.

The rope team is responsible for rigging rope rescue systems and is often responsible for more technical terrain rescues. Some rope volunteers, including Rothrock, specialize in STEP training with Cañon Helitack.

Next year, helitack might offer Hoist training to SAR teams. The National Guard also has Hoist capabilities, but they are up in Buckley and can take 6 hours from request to arrive at a rescue site in the Sangres.

Helitack had a week of training with the National Guard earlier this year to learn Hoist rescue techniques. Teaching SAR members Hoist techniques in the future might help teams arrive to rescue subjects more quickly.

“If we request a helitack, I am on the phone with Cam [Meganck] immediately, and they can be there within an hour and a half,” Wilson said.

AVSAR also works with Saguache SAR, a smaller team made up mostly of firefighters and emergency medical service responders. Saguache is one of the largest counties in the state with lots of ground to cover. Partnering with Alamosa Volunteer Search and Rescue (AVSAR), Custer County SAR and Cañon Helitack is imperative to meeting rescue demands of Saguache County.

William Klausmeyer, an emergency medical responder and firefighter, joined Saguache SAR in February of 2022. He speaks for his crew when he expresses appreciation for mutual aid.

“Alamosa in particular–I’ve gone on several missions with them, and they’ve invited us to several of their training sessions so we can work together better in the field,” Klausmeyer said. “They were all really professional and talented people. I love going on missions with them because I always end up learning a lot that I can then pass on to other team members here.”

David Frees, Saguache SAR team leader, explained that mutual aid is essential to meet the demand of the growing number of rescue calls.

In 2018 when Frees joined, they averaged 26 calls a year. Last year, they saw 59 calls, and most of those were for visitors to the San Luis Valley. A third of those calls were on trails in Crestone, and the other two-thirds were on the Western side of the county.