A history of the La Garita Caldera: the supervolcano in your backyard 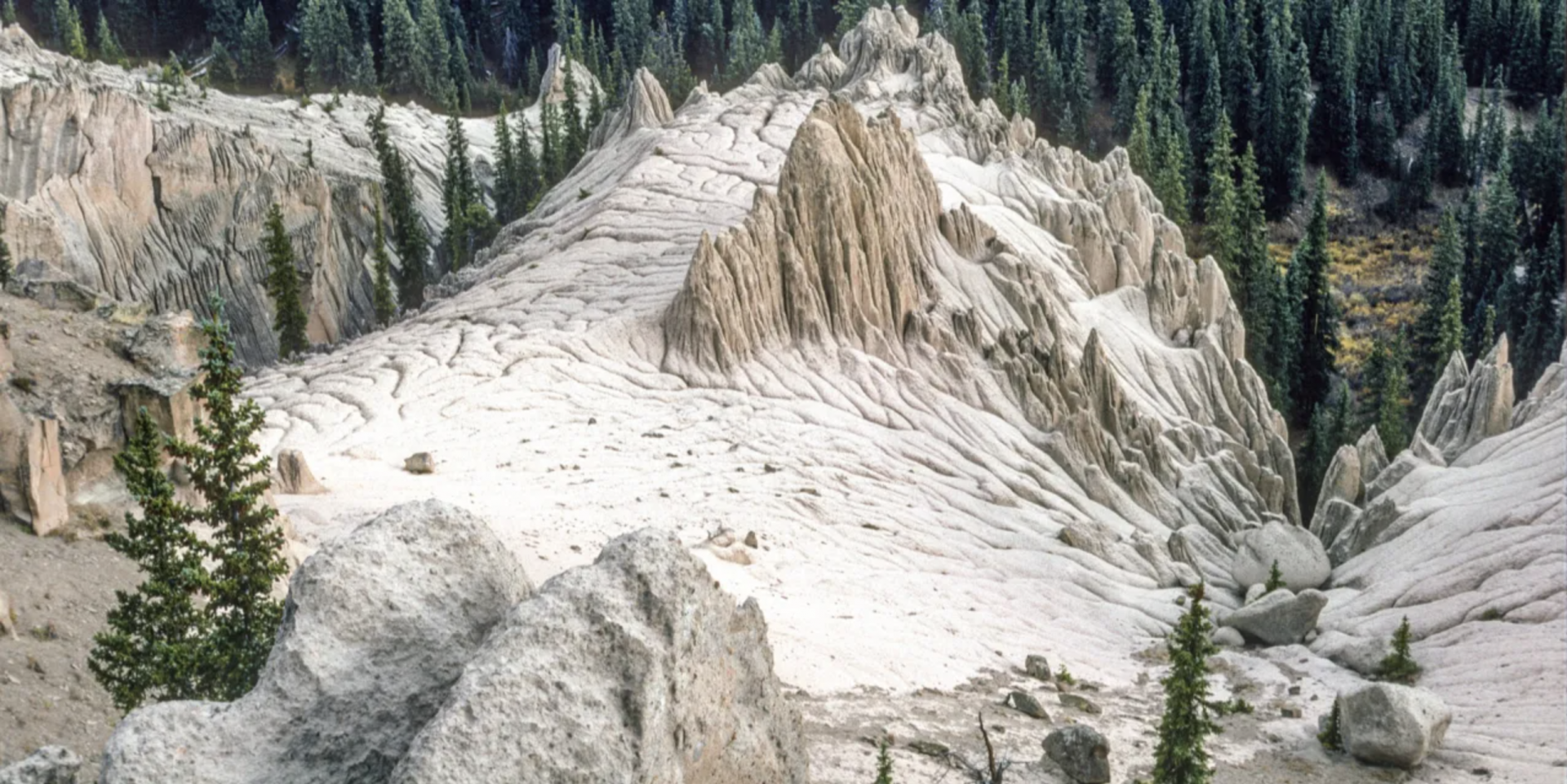 Passing though thirteen counties in southwestern Colorado, the San Juan Mountains are host to an array of historic mining towns, the state’s largest wilderness area, and the headwaters for the Rio Grande. Nature lovers flock to this range for its stunning views, high-mountain peaks, and endless recreational opportunities. However, few realize that this lush landscape was once host to one of the largest, most destructive volcanic events in Earth’s history, the La Garita Caldera eruption.

A buildup of extreme pressure and heat within the earth spurred this incredible supervolcano to burst approximately 28 million years ago—before the San Luis Valley was even formed. Roughly 1,200 cubic miles of debris were blasted from the volcano’s center near Creede, CO, emitting heat that reached upward of 1,500°F. If measuring the quantity of material released in the explosion, La Garita was 1,000 times greater in extent than Mount Pinatubo in 1991 and 10,000 times greater than the Mount. St. Helens explosion in 1980.

The impact of the La Garita eruption annihilated the entire Four Corners region, decreased average temperatures by nearly 14°F, and sent volcanic rock and debris flying at speeds as high as 75mph. Layers of volcanic ash, or tuff, spread across the landscape in one gargantuan ash-flow event. Some reports suggest that the eruption coated most of the state with a blanket of ash that was up to 300 feet deep. Older volcanoes within the San Juan Volcanic Field were blasted to bits. All that remained after the eruption was a gaping, red-hot wound the size of Mineral County that could have been seen from space. Spewing ash and ablaze, the lush and fertile landscape of Colorado that we know today would have been completely unrecognizable.

After ash from the supervolcano cooled and compacted, the volcano’s center caved in, leaving behind an enormous caldera in the earth. This 20×50-mile depression is known as La Garita Caldera. With the passing of time, the massive crater began to slowly fill in with ancient lakes, hot springs, and volcanic debris. Geologists suggest that activity from younger and smaller volcanoes eventually buried much of the La Garita Caldera, especially the southern rim. It is speculated that this portion lies thousands of feet below ground, perhaps beneath the hardened ash layers from a more recent eruption that formed the Creede Caldera.

The collapse of the La Garita Caldera eventually also formed one of Colorado’s most bizarre and fascinating rock structures, known as the Wheeler Geologic Area. Tucked away in La Garita Wilderness at 11,500 feet are rugged columns and smooth cascades of tuff that formed after ash from the supervolcano compressed and solidified. Over time, erosive events chiseled the rock into a variety of unusual shapes that make it a fascinating point of geological interest.

In 1908 the rock outcropping became Colorado’s first national monument (Wheeler National Monument) and was described by former President Teddy Roosevelt as of “unusual interest” due to its “volcanic formations” and “erratic erosion.” In the mid 1900s, Wheeler was disbanded as a national monument due to lack of visitation and difficulties accessing the area. Reaching Wheeler today requires an arduous 7-mile trek or a wild 14-mile drive accessible only by a 4×4 vehicle. Despite being so remote, visiting Wheeler Geologic Area provides onlookers a unique glimpse into Colorado’s ancient volcanic past.

While the eruption of La Garita supervolcano is unmatched in scale and power, it was certainly not the first nor the last volcanic eruption to shape the San Juan Range. Roughly 35 million years ago (millions of years before La Garita), volcanic centers began to dot the region as a result of magma forcing its way through cracks in the Earth’s crust. Layers of lava, ash, and other debris collected as these volcanoes erupted, which created a series of stratovolcanoes (like Mount St. Helens) that made up the San Juan Volcanic Field.

The Volcanic Field is believed to have spanned an area of over 25,000 km squared and to have been thousands of feet thick. Just like La Garita, other volcanoes erupted, collapsed, and created calderas that still scar the central San Juan Mountain landscape today. These calderas were large, likely tens of kilometers in diameter, though nothing in comparison to La Garita Caldera. Major ash-flow eruptions began to simmer down around 26.5 million years ago in the Volcanic Field; however, intermittent basaltic eruptions continued up until about 5 million years ago.

While most volcanoes in Colorado are now extinct, there is one exception. Located in northwestern Colorado, Dostero Volcano is the state’s only “active” volcano, a status given by the U.S Geological Survey (USGS) to describe volcanoes that have erupted within the last 11,650 years. Unlike La Garita, indigenous people living in Colorado a little over 4,000 years ago would have witnessed Dostero’s last eruption. Some sources claim that the name “Dostero” comes from a North American indigenous word for “something new,” hinting at the wonder and shock that this eruption must have inspired in local inhabitants. Though considered active, most scientists agree that another eruption from Dostero is unlikely anytime soon. However, because the USGS has ranked this volcano as posing “moderate” threat, it will continue to be monitored and observed.

For thrill-seekers and those with a 4×4 vehicle, Dostero Volcano can be accessed from a rough and rocky road off of Interstate 70 near Glenwood Canyon. Visitors can stand witness to the 2,460’ wide by 250’ deep crater that was left from Dostero’s last eruption. The pit is now filled with a gentle blanket of vegetation and rocky debris. Nearly 3 kilometers of the hardened ash-flow can also be seen from the I-70 roadside.

Calderas, ash-flows, and tuff formations are not the only reminders that Colorado was once home to an abundance of volatile volcanoes; the historic mining boom in the San Juans is also proof. For millions of years, earthshattering movements from local volcanism produced faults and fractures in rock that would later fill with silver-lead-zinc ores. While indigenous peoples had already inhabited the San Juans for thousands of years, white settlers began to discover these vein deposits in the 1800s. Mining districts quickly popped up across the San Juan Mountain range until the silver boom slowed in the late 19th century. Mining towns that survived the industry’s collapse, such as Creede, Colorado, are still thriving towns today.

Colorado’s volcanism also gave rise to an abundance of geothermal springs that have been enjoyed across the state for thousands of years. A notable example is Pagosa Hot Springs in the San Juan Basin. The healing waters from this hot spring occur as groundwater seeps deep below the earth’s surface, is heated by residual volcanic energy, and rises back to the surface. Pagosa Springs is believed to have the deepest geothermal aquifer on the entire planet, as water travels 6,000 feet below the ground before again reaching the surface. Like all hot springs, Pagosa Springs is honored for its relaxing and rejuvenating qualities. The word “Pagosa” itself is a Ute word that translates loosely to “healing waters.”

Massive calderas, solidified ash-flows, distinct rock formations, historic mining districts, and geothermal springs all connect us to Colorado’s volcanic past. They also remind us that great beauty and abundance can be born from destruction. Over time, the uninhabitable landscape of the San Juan Volcanic Field, and the massive La Garita supervolcano, gave life to the lush and supportive San Juan Mountain Range that we enjoy today. With natural disasters and climate change continuing to shape our physical environment, the future of our planet is unknown. Despite these threats, however, our volcanic past is proof that destruction also gives rise to new life.

“Chasing the Volcano”, by Peter Lipman.

“Dostero Volcano reminder of Mother Nature’s explosive might in Colorado”, by Seth Boster.

“The Fascinating Story Behind Wheeler Geologic Area”, by Stewart Green “The Geology of Pagosa County”, by Glenn Raby

“The SUPERVolcano”, by USDA Forest Service.